Nearly Nonverbal to Thriving Adult: The power of music for children with autism

Having a child with autism can bring a wide range of experiences into a home, both fun and challenging. Because each child is different and the autism spectrum is so vast, the experience from one family to another can seem too diverse to compare. Finding resources to support children on the autism spectrum can be difficult because of the wide range of symptoms present with an autism diagnosis.

No matter how vastly different each experience may be, there is one common link between them all. Autism is a neurodevelopmental disorder, which is why a research-based, widely studied music listening therapy program such as The Listening Program® (TLP) can bring incredible benefits to people of all ages and all abilities within the autism spectrum. From improving communication to decreasing sensory sensitivities or even improving overall emotional and mental performance, TLP has been shown in multiple studies to help improve the lives of those with autism.

The Shaw Family knows the benefits TLP can bring firsthand. At age three, their son Michael started digressing developmentally, and by the time he was five was nearly nonverbal. His family wanted a natural way to support their son, and within months began referring to TLP as “magic music.”

We hope that this story will inspire others who have a loved one with autism to see the benefit of music listening therapy, no matter what autism may look like in your home. Using music to improve overall brain health can be a trusted solution for those with autism. 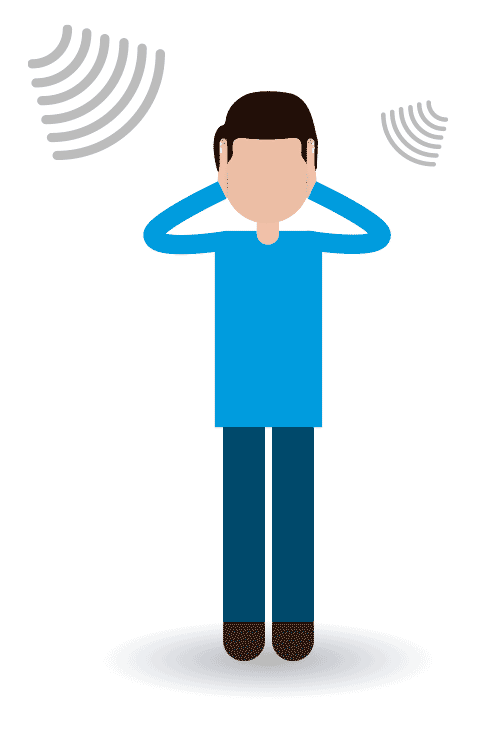 Michael was a typically developing child who suddenly started to regress in his development around three years old. By the time he was five, he was in speech and occupational therapy and had received a PDD-NOS and Sensory Processing Disorder diagnosis.

Entering kindergarten, Michael had very few words he was using on his own. He could recite phrases of movies or common phrases he heard at home, but expressing himself verbally using his own words was a struggle. He remembers that time saying, “I would break down multiple times a day because I wanted to say something, and I got extremely frustrated that I could never find the words to say it.”

As Michael’s development digressed, his sensory sensitivities increased. It was common for Michael to become overwhelmed and dysregulated by too much noise, people, or other distractions at home. Even everyday household noises like the TV or a blender would set him off. Often that would result in Michael:

At school, these sensitivities caused him to be inattentive or sometimes even aggressive, which was not conducive to learning or being part of a large class in general education. There were conversations about placing Michael in a special education classroom to minimize the overwhelm.

When Michael was seven, the Occupational Therapist Michael was seeing was trialing a new intervention with Primary Children’s Hospital that used specific sound frequencies to help connect and rebuild “broken” neural pathways. This program was The Listening Program, which his parents decided to try.

Within months, he went from no complete sentences and full-blown meltdowns multiple times a day to normal conversation. After years of developmental digression, Michael began progressing.

We called this his ‘Magic Music.’ It changed our world and gave us back our son.
– Michael’s mom

The process used with Michael has since helped thousands of other children with autism in similar ways. Because TLP is natural, evidence-based, and can be done in 15 minutes a day at home, families across the globe are seeing it as a great way to address any of the vastly different aspects of autism.

The Process of TLP

The program progresses through four color-coded frequency training zones, targeting specific benefits or functions. Each color focuses on a different band of sound frequencies that incrementally stimulates the full range of human sound perception, from 20 Hz to 20,000 Hz.
These zones are mapped to brain regions that respond to different properties of sound according to the vibratory frequency, just as the keys on a piano are tuned to play different musical notes.

At the age of seven, Michael began using TLP five days per week. His parents and therapists identified the most important goals, including to improve his sensory sensitivities and seeking tendencies. These goals were the highest priority:

To achieve these goals, he started listening to TLP at home, five days a week, two times a day 15-minute sessions for ten weeks.

Each week his family recorded their observations of the changes they saw in Michael at home. You’ll notice, for Michael, the changes did not happen immediately. The family trusted the research behind TLP and moved forward, and by week six, huge improvements were noted. 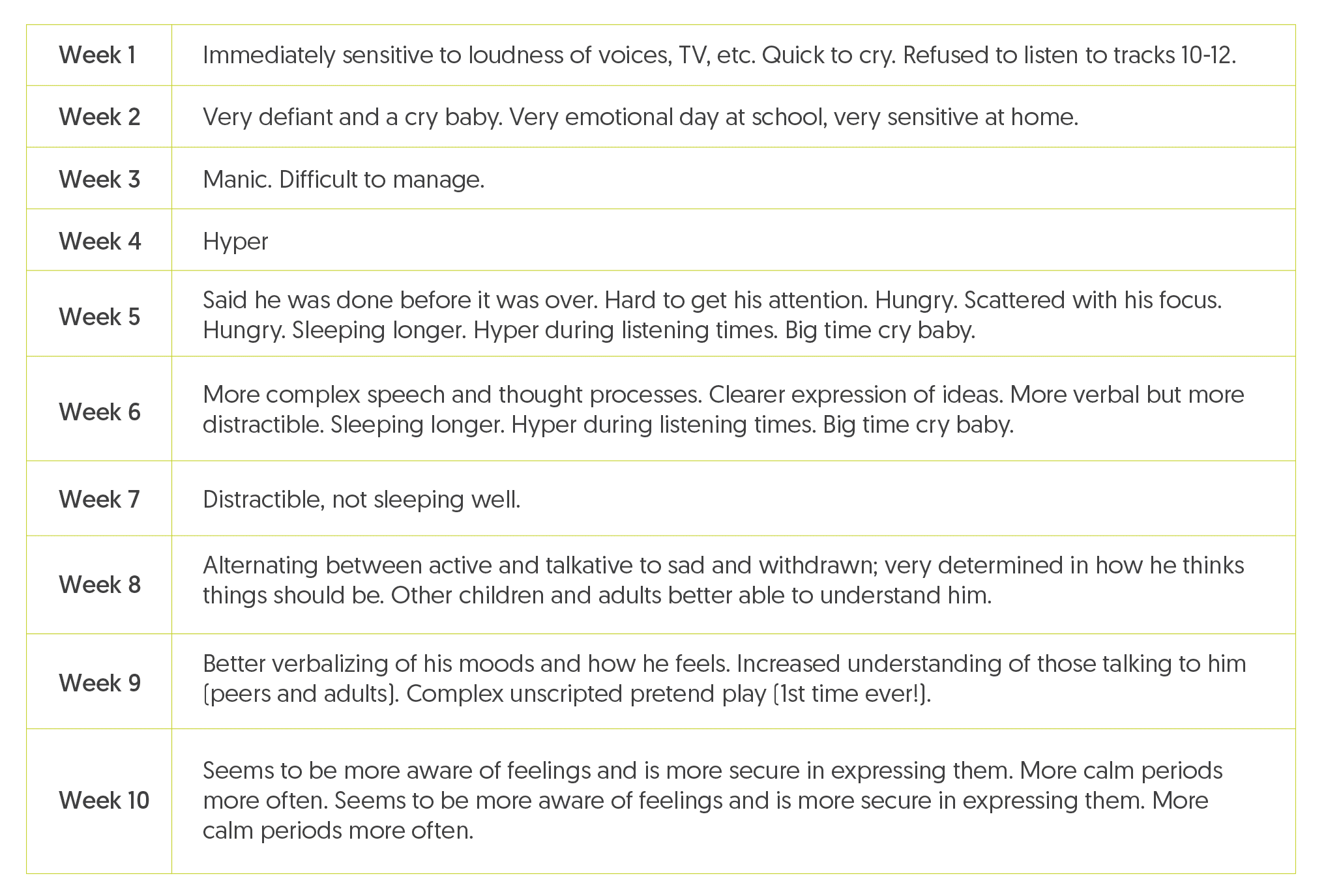 After years of digression, Michaels’s family saw significant gains in just ten weeks:
“Toward the end of the first ten weeks, Michael burst into tears one day, and when asked, he said he was crying because I made him have “quiet time” (non-nap time). I cried for joy at his ability to put those concepts together. He experienced sadness, knew what caused it, and could express that to me.”

The changes extended outside of his home. Michael’s teacher also noted after these ten weeks that he could tolerate and focus during times of loud sounds or visual distractions. This improved ability to focus resulted in halting any talks of special education placement for Michael. He stayed comfortably in his general education classroom.

Outside of the classroom, Michael’s mom noted other changes:
“Before starting TLP, children Michael’s age had a difficult time playing with him because he could not follow their directions in play. He couldn’t comprehend the flow and their directions of play. He would lose focus and patience with what they were doing and wander off and become emotional. Now he will play for hours without mishap or misunderstanding and enjoy other children his age.”

The changes everyone saw at home, at school, and with playmates were incredible. His therapist noted even more specific progress in Michael, noting:
“Since M.S.’s completion of TLP, I have seen a tremendous difference in his overall receptive and expressive language skills. Along with his social skills. He can complete tasks with minimal cueing and remain engaged in tasks for longer periods. He can also complete multi-step directions without assistance. I feel this program has helped him make greater leaps and bounds in his overall developmental progress than if he were just to have speech and occupational therapy interventions alone.”

His speech therapist said:
“Michael continued to require skilled occupational therapy services using a Sensory Integrative therapy approach to help improve his participation and performance in valued daily occupations. However, [after TLP] that intervention was done with less intensity and frequency within an outpatient rehabilitation setting.”

Michael’s progress wasn’t immediate, but it was lasting and profound. He remembers, “Within months of starting TLP, I went from being the “special” kid to interacting with other kids in a usual way. 99% of the people I meet now have no clue I even have an autism diagnosis. It’s really helped me integrate into society where otherwise I don’t think I would’ve ever been able to on my own.”

His mom continued to utilize TLP periodically in Michael’s life, knowing that each cycle would help him improve differently. She said, “Over the years, we have revisited The Listening Program as needed. You could almost see in his eyes when Michael would get stuck in his brain. That’s when we knew he needed another round of TLP.”

Michael completed a B.S. degree in Computer Science with Western Governors University. He received terrific grades. Most people who encountered him had no idea that he started from a neurodivergent beginning.

From nearly nonverbal to a thriving adult, the power of the scientifically designed music in TLP helped bring incredible benefits to the life of Michael and his entire family.

Sound Sensitivities and What to do About Them

TLP for Autism and Special Education