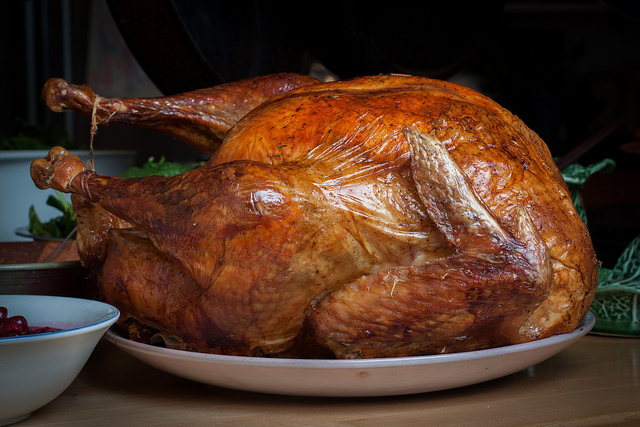 Thanksgiving is the time of year to give thanks — and also, it appears, to place blame.

But it’s not the perennially put-upon tryptophan that’s the culprit. Yes, turkey — the traditional holiday fare — has tryptophan, an amino acid that boosts production of serotonin, which has a sleep-inducing effect.

Problem is, turkey doesn’t have enough tryptophan to be indictable. Nor does tryptophan get a free ride straight to the sleep center in your head — it has to compete with all the other travelers on the brain train. In actuality, very little gets to the destination.

So what causes the torpor that follows the turkey? You might want to blame dessert — or the drinks like beer, wine, or champagne that often accompany the Thanksgiving repast. Both carbs and alcohol have known soporific effects.

In general, though, it’s not any one thing — it’s all of it.

Studies continue to confirm what people have long known: a big meal is usually followed by time spent to “rest and digest.” The stretching of the small intestine induces sleepiness and a protein–fat loading of the stomach which induces sleepiness, say biologists, and more blood going to the gastrointestinal tract means less will be allocated for the brain.

In other words, after you leave the table, the parasympathetic nervous system restores and conserves energy by reducing heart rate and blood pressure while increasing the salivation and gastric action required for digestion.

The reduction of heart rate and blood pressure, as well as the slower breathing when you’re full, make you yawn — and then — well, you know the drill.

Give thanks on Thanksgiving, but don’t put the handcuffs on the turkey. Old Tom is not to blame — we all are, when we gobble, gobble, gobble.