TLP Brought Back My Brain After A TBI

By Valerie Carpenter—Founder, The Vestibule Center for Sound Living

In the early eighties, I sustained a traumatic brain injury after being struck on the back of the head with an iron bar during a dress rehearsal for a play. Long story. The play was a comedy, but what followed was not.

Back then, the medical profession did little by way of treatment for concussion, or for the symptoms that might arise in its aftermath. I was dismissed from a New York City ER—another long story—with the injunction to go home, stay in bed for a week, and take aspirin for pain.

Well, as an eager young actress starring in her first Off-Off Broadway show due to open in just a few days, that didn’t sit too well with me.

To make a long story short, after three days of imprisonment at my parents’ home—and with the reckless determination of youth—I found myself on the Long Island Railroad chugging along the tracks to the final dress rehearsal. That’s when things started getting interesting.

You see, I had by then started developing some acute language deficits. I could no longer form sentences. My speech was an unintelligible blur of mismatched phonemes and stammers. There was no connection between what came out of my mouth and the thoughts that were trying to forge their way through my increasingly foggy brain. Nevertheless, I was determined to open the show!

To my surprise, I discovered that—for whatever mysterious reason—the words I had already committed to memory (i.e. the play), were the only words I was capable of speaking coherently. And not only the words, but the actions, intonations, gestures, and even the breathing patterns I had learned along with them, seem to have been stored in some other portion of my brain. Doing the play allowed me access to the part of me I knew. It was a welcome respite from the person I had become but could not comprehend.

So I did the show, even getting good reviews. But that was all I could do. Fortunately, I lived only a couple of blocks from the theatre. So for six weeks, my days consisted of waking up just in time to get to work, do my hair and makeup, get into costume, and perform the show—before trudging wearily back to my apartment where I would collapse into bed until the next performance.

After the run had finished, the acute speech and language deficits persisted with little relief— aggravated no doubt by my naïve and single-minded belief that the show must go on (with me in the leading role, of course!) For months, I struggled mightily to create any sentence at all. And I was tired. So tired.

I no longer recognized my 25-year-old-self. I could not do simple math—balancing my checkbook was out of the question. When I finally returned to dance classes, I found I could execute all the combinations if I started on my right foot, but if I tried to start on the left, I couldn’t even lift it! The brain fog was immense, and everything I looked at seemed to be outlined in a blurry blackness.

When I finally visited a neurologist and took the recommended tests, he told me that everything looked normal and I should take aspirin for pain—which was the one symptom I didn’t have.

Needless to say, all this was not a good look for an aspiring classically-trained actress in the world of NYC theatre. I grew despondent, but carried on.

The most extreme symptoms began to abate after about six months, and I was able to communicate more freely, although with a pronounced stammer. The various day jobs I held were torturous and didn’t last very long. Nevertheless, with snail-like progress, after about two years I had regained just enough of my former skills to resume building a successful career on the stage that lasted some thirty years.

Fast forward to the San Francisco Bay in the year 2007. I found my way into a yearlong course, “Sound, Voice, and Music Healing,” at the California Institute of Integral Studies. Among the many treasures revealed during this program—and that now inform my current work as a sound healing practitioner—was the groundbreaking contribution of a French doctor, Alfred Tomatis.

Tomatis developed a listening program with specially treated music to tonify the ears and to effectively “rewire the brain.” This is made possible by the capacity of our brain to build new neural pathways, or neuroplasticity. In short, we can build a better brain… and one of the ways we can do this is through music!

Over the past six decades, the body of work inspired by Dr. Tomatis has been successfully used to treat learning and attention difficulties such as ADD/ADHD, dyslexia, and auditory processing disorder, autism spectrum disorders… and traumatic brain injury. Needless to say, this got my attention.

Eventually, I found my way to a conference with Advanced Brain Technologies, the folks who advanced the legacy of Dr. Tomatis’ work with The Listening Program® (TLP). As I listened to presenter after presenter, I was blown away by the incredible work they were doing helping people of all ages overcome huge challenges, all with the aid of this scientifically engineered music.

In particular, I will never forget the story of an Australian teenager named Charmaine who, just weeks after getting her driver’s license, lost 70% of the left hemisphere of her brain after a near-fatal car crash. After surgery, her doctors determined that, if she survived, she would remain in a vegetative state and certainly never be able to speak, walk, or feed herself. Fortunately, her steadfast parents found their way to Tracey Butler, an experienced TLP provider. With time, patience, and music, Tracey helped this young woman regain her life. She closed her presentation with video of Charmaine joking, laughing, eating, and providing encouragement—as a registered motivational speaker—to other patients at the hospital where she herself had spent 51 weeks of her young life.

You can view the presentation of Charmaine’s miraculous story here.

I signed up then and there to become a TLP provider, not knowing at the time that I would become my own first client.

Just two years after my visit to the headquarters of Advanced Brain Technologies in August of 2015, I sustained another brain injury after my own car accident. Mind you, this was nothing compared to the severity of Charmaine’s. My car was simply rear-ended on a city street—not even that hard, didn’t even hit my head or sustain any physical injury—a mere bump in the road as far as car accidents go. Or so I thought.

But even before I finished the requisite phone call with the insurance company to report the incident, my speech and language ability started disintegrating—fast. The other driver kindly stepped in to complete the call because, once again, I could no longer make a sentence. In fact, within hours all the symptoms of the previous concussion returned in full force—dizziness, blurred vision, hypersensitivity to light and sound, and a near total inability to communicate.

Once again—a trip to the emergency room, an MRI, and a visit with a neurologist who told me to go home, stay in bed for a week, and take aspirin for pain (which I didn’t have).

But this time I had a secret weapon. I had learned about neuroplasticity and integrative medicine, and I knew there were modalities and practitioners out there who could help me recover.

And I had The Listening Program.

After giving my brain adequate time to rest—notably missing from my first go-round—I began using TLP Online. Fifteen minutes of listening per day brought clarity to my mind and relaxation to my body. Within six weeks (not months), I was able to form complete sentences again.

Brain injuries heal slowly, and they can be emotionally and socially painful. But with TLP and my team of practitioners, I had the tools and the confidence to make a full recovery.

Since then, I have recommended TLP to clients suffering from traumatic brain injury, attention or learning difficulties, lack of focus, brain fog, and fatigue. One client, a native German speaker who complained of difficulty following the complex conference calls that were a vital part of his work, said his experience listening to the music felt like “taking a shower for his brain.” Within weeks, he noticed that he no longer had any difficulty keeping up with the demanding conference calls, and that he was approaching work with more enthusiasm, motivation and self-assurance.

During the pandemic, the folks at Advanced Brain stepped forward by making available a free version of their 90-day TLP program, which, for many of my clients, felt like a lifeline. With the increased stress of social isolation, uncertainty, and fear, listening to the brain-changing music of TLP for fifteen minutes a day provided them with a sturdy platform to meet the ever-changing demands of their day.

FOOTNOTE: About two weeks after sustaining the second concussion, I was scheduled to sing soprano in a choir performance of the Brahms’ Requiem. Given my earlier experience, I thought “Why not?”—even though my language difficulties were then at their height. I’m happy to report that I was able to perform the whole concert from memory (as my eyes could not read the words on the page) and in German (which is a language I don’t otherwise speak). I must remember to ask the neuroscience experts at Advanced Brain why that is! 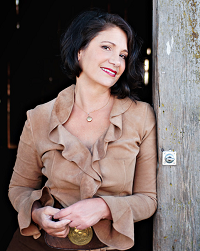 Valerie Carpenter, MFA
Valerie is a certified provider of TLP Online and InTime from Advanced Brain Technologies. She is the founder of The Vestibule Center for Sound Living in the San Francisco Bay Area, and holds additional professional certifications in sound healing and psychoacoustic science from the California Institute of Integral Studies, the Acutonics Institute of Integrative Medicine, Integrated Listening Systems, and Vox Mundi School of the Voice. She has developed pioneering non-invasive protocols using sound for stress and pain relief, grounding and centering, spiritual emergence, and trauma recovery, and is co-author of Free Your Voice: Awaken to Life Through Singing, published by Sounds True.